Workshop Tip! Preparing tree forks for laminating with a sled

Yeasterday I read this quote by Bert, in which he suggested Obl1v1Aus to build a sled...

Bert the Welder said:
One way that may help is to make a sled. Kind of an "L" shape with a strip that would run in the miter slot of the saw table, if there is one. You screw the log to the back, upright part of the "L" and run the log through the saw on this.
Click to expand...

And then I got an Idea!
Such a sled is perfect for giving almost every imaginable shape two parallel surfaces! - also forks.
Then I changed Bert's Idea of a screw against two nails. Why? Because then you've got the possibility to remove both uneven parts of the fork without hurting the inner part.
Then I searched for some rectangular pieces of furniture plywood and started to make the sled. Nailed two square sheets together and placed a spacer from leftover multiplex in one edge. The spacer is very useful as a handguard when sawing, you can perfectly grab it between fist and thumb when you push the sled through the circular saw later on.
Next, I drilled two little holes in the upstanding plate. Now I took two roundhead-nails and marked their depth with isolation tape, that I later on knew how deep I can knock them into the board. This is a very important step, otherwise it could happen that you knock the nails too deep and catch them with the sawblade! 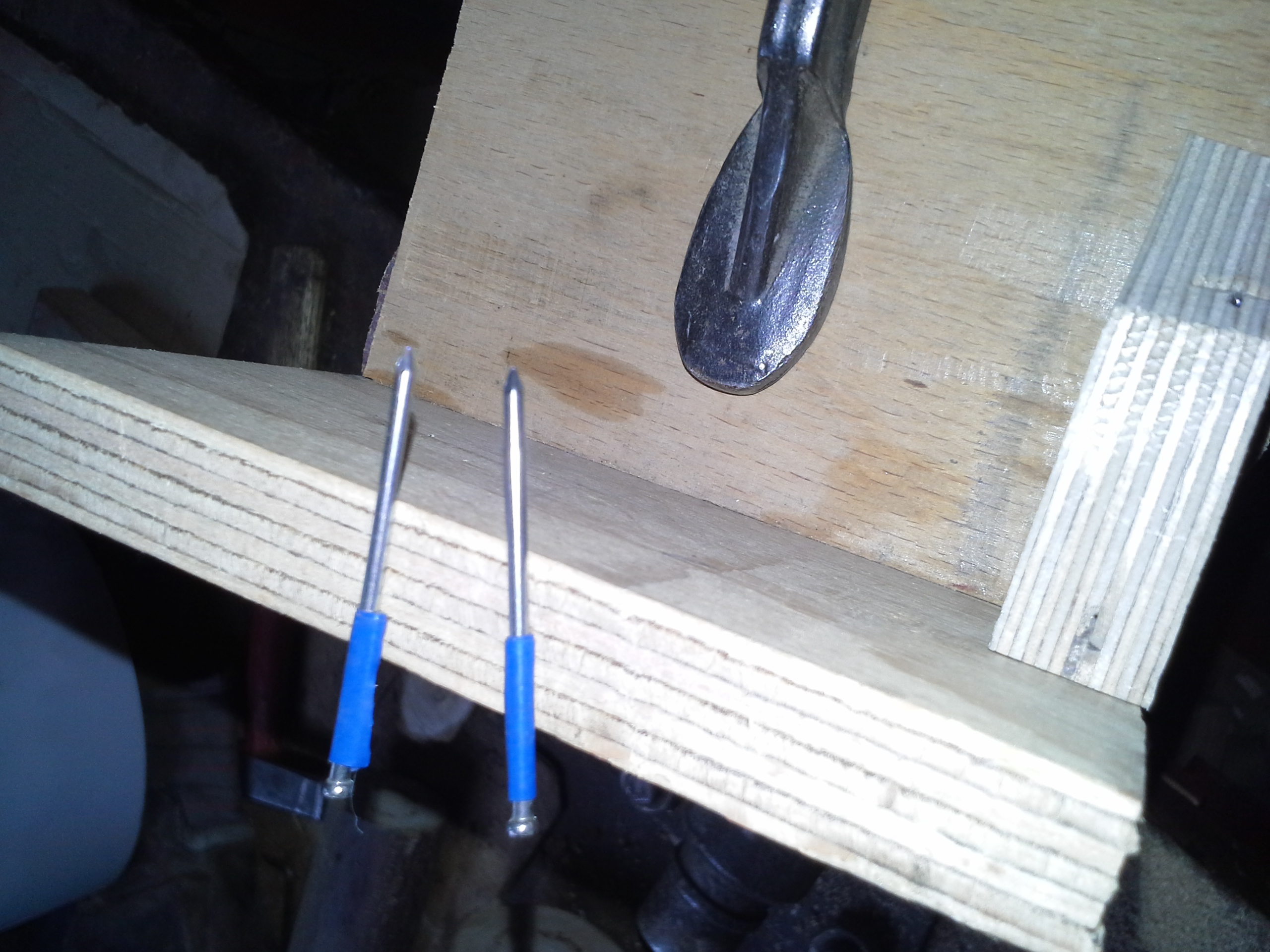 Now I started with preparing my fork a little bit, I just needed a relatively even small flat at one side to have a straight angle when nailing it to the sled. 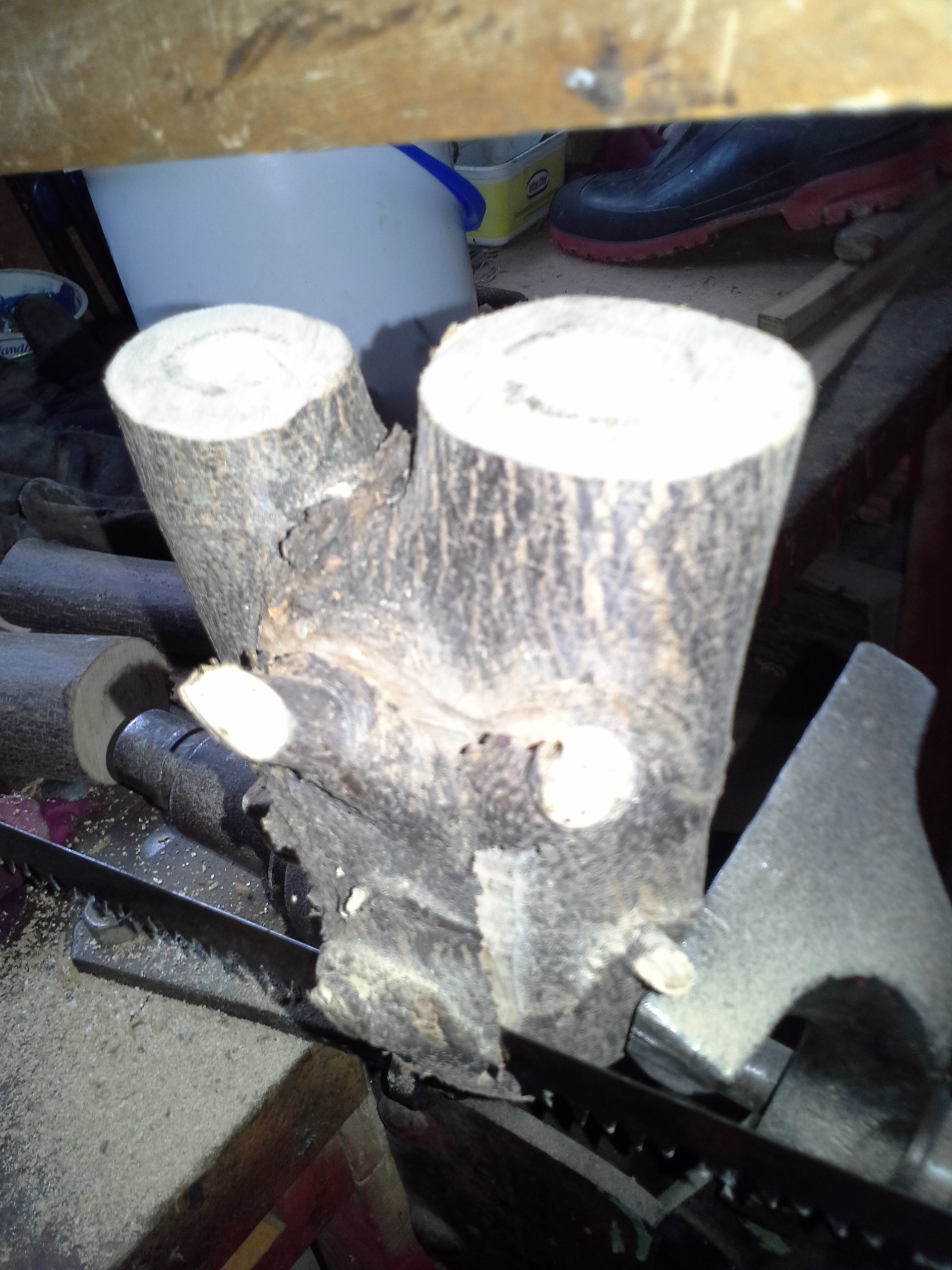 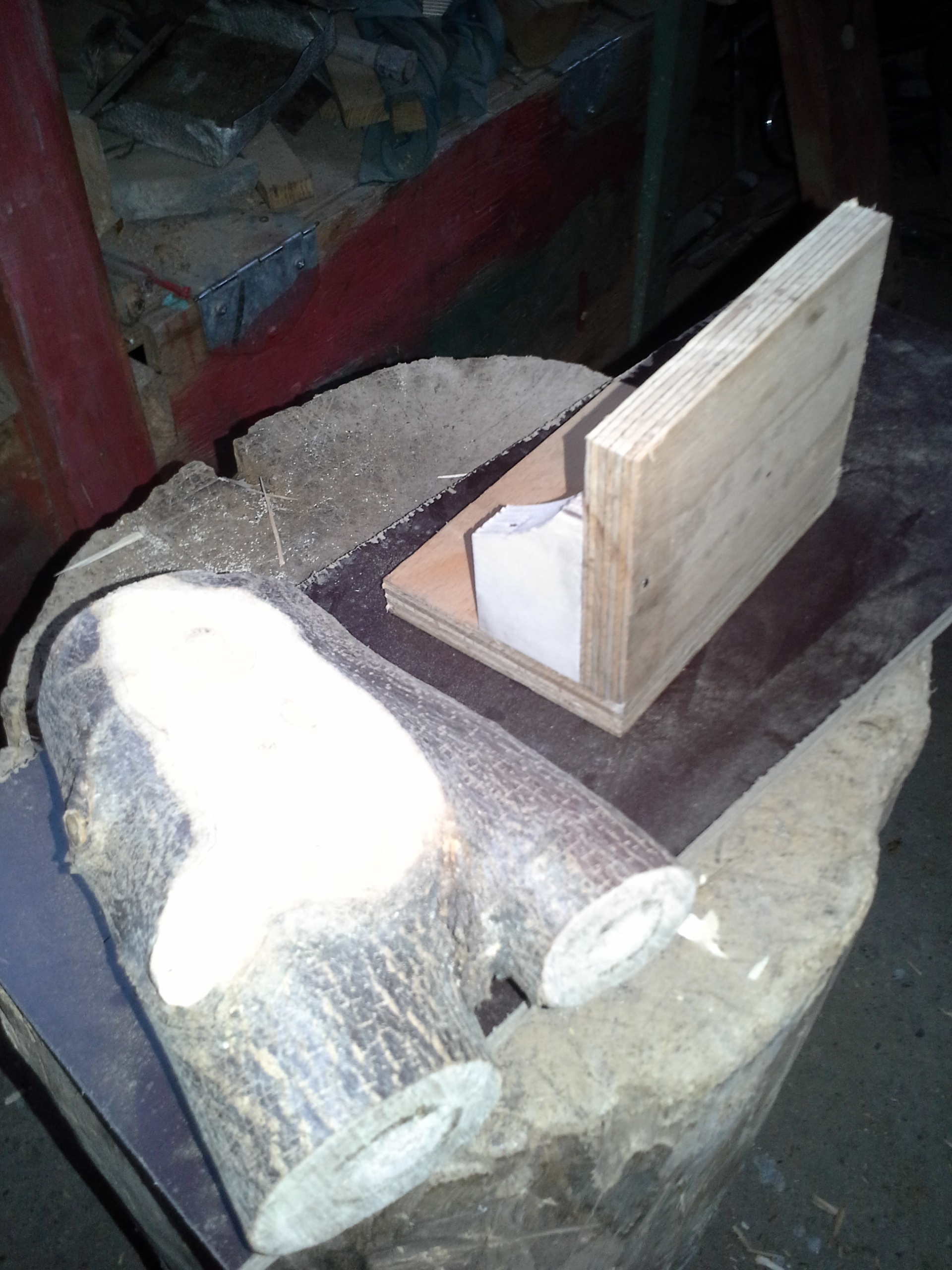 I also predrilled the fork a little bit for better nailing, but also here you have to check the depth, otherwise you'll have holes in the fork later on (not so bad, you'll laminate wodd over it anyways ) 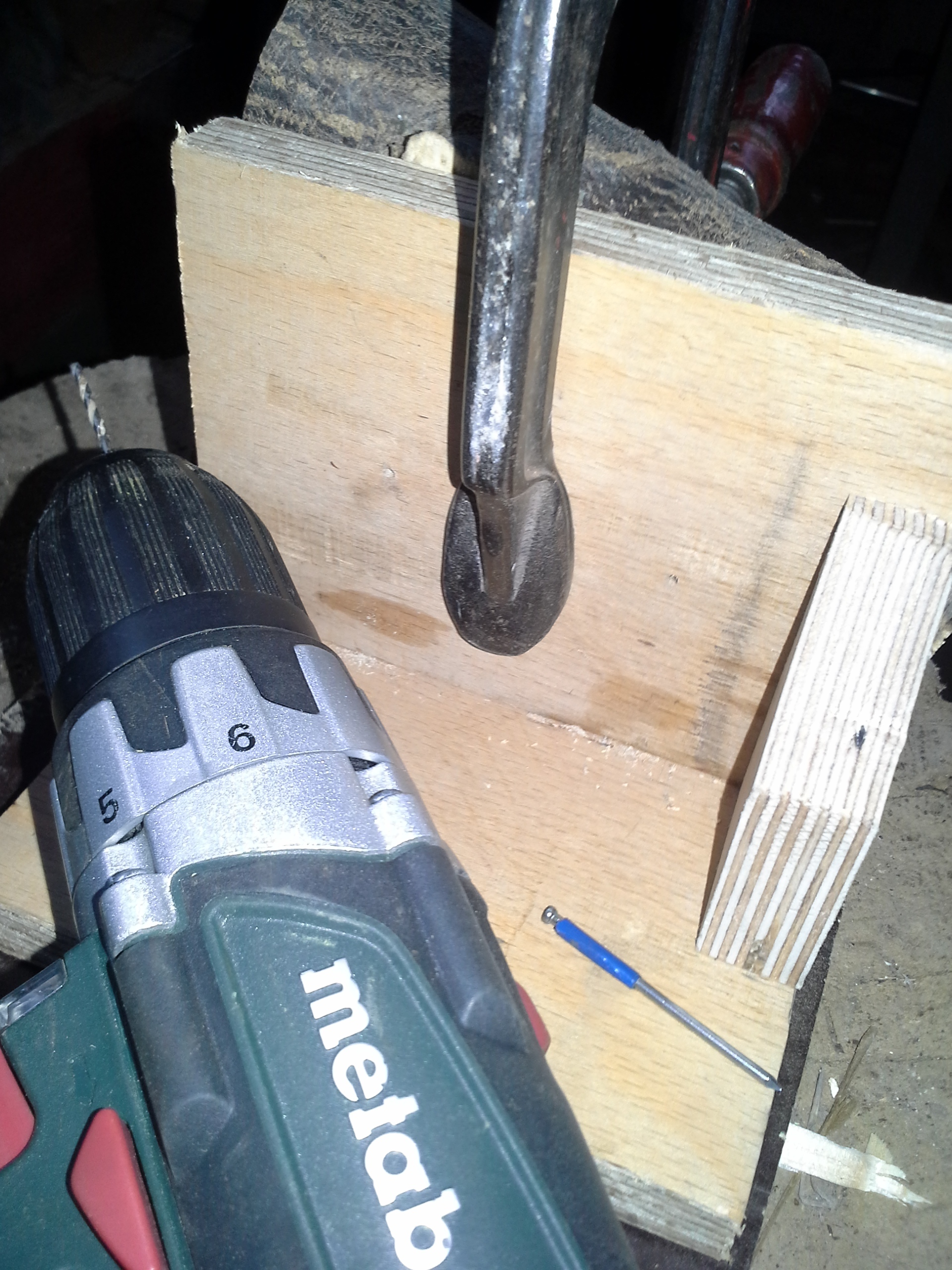 And then I started nailing the fork to the sled, the nails as deep as the isolation tape just touched the board. In my case I knew that now the nail tips were standing out 6mm from the board into the fork. 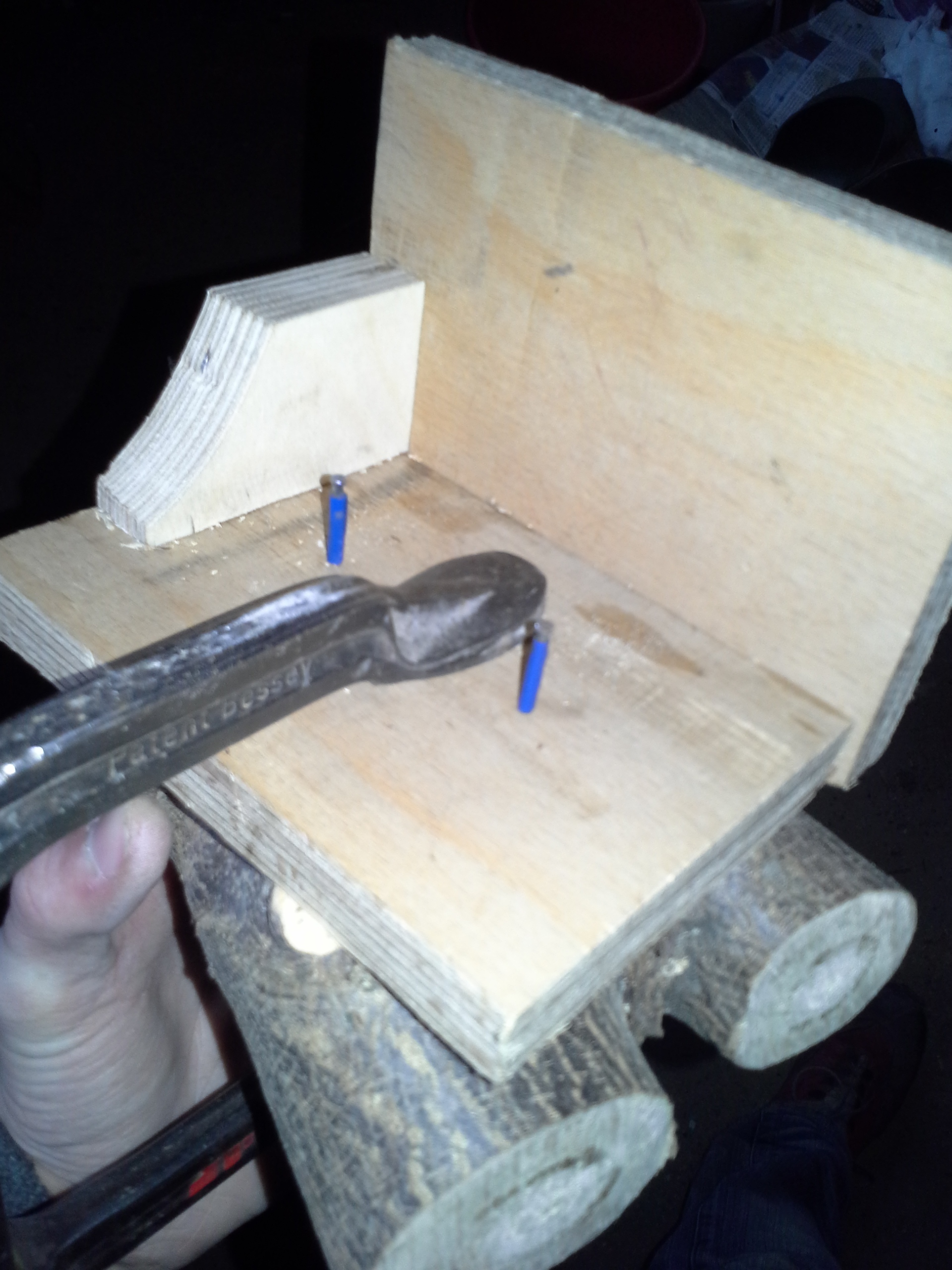 Now the loud part:
I used the adjustable leader of my circular saw and pushed my sled along it for an absolutely straight cut.
For the first time with a depht of about 1.5 cm to rip the left uneven part off: 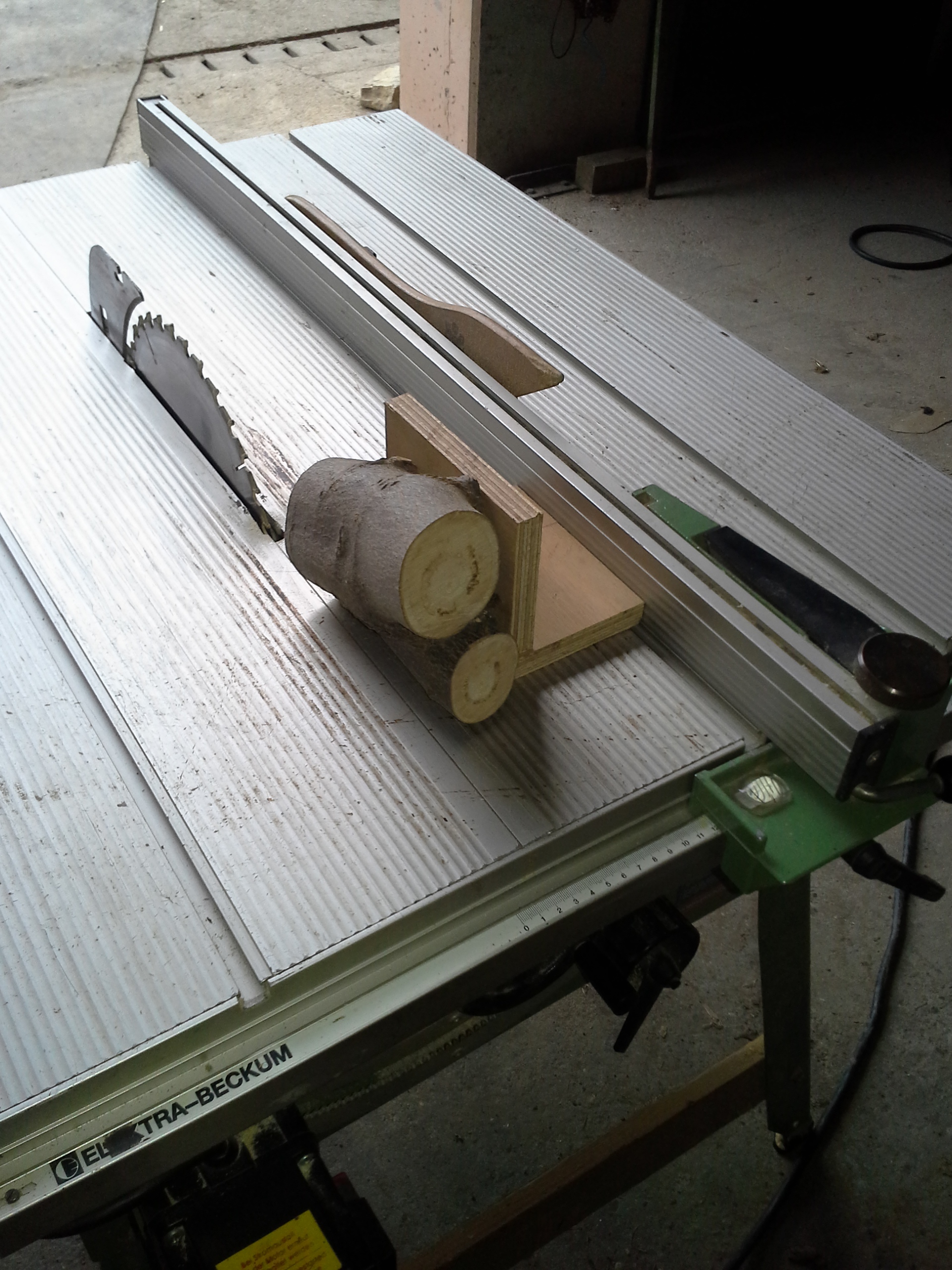 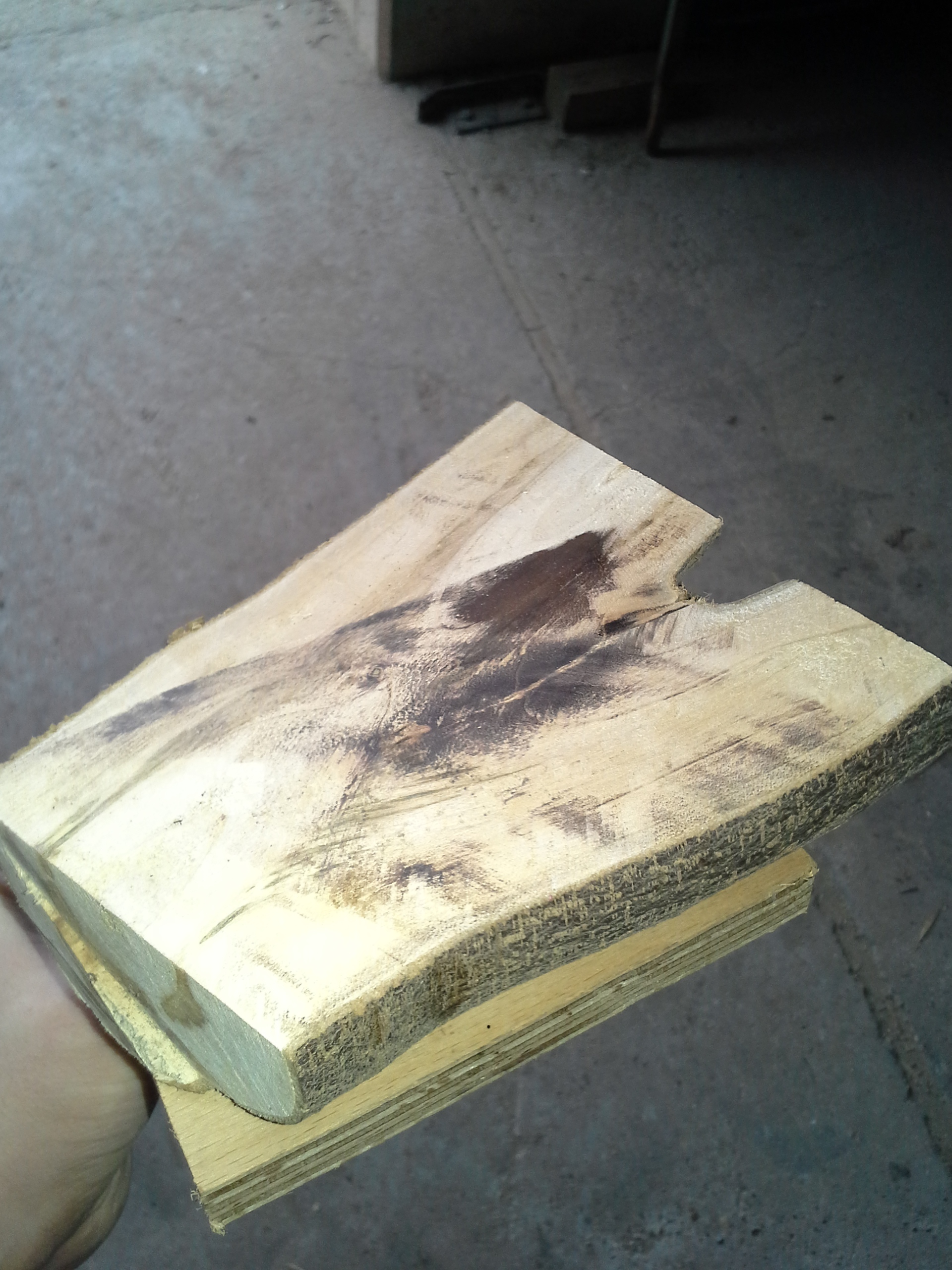 And then the rigt part. You can let your forked sticked to the board exactly this way, you just have to push the adjustable leader of the cirular saw as much nearer to the blade as thick as you want your "fork board". Now the part cames where you see why you needed the isolation tape. If my nails were going too deep into the fork, the saw blade would have catched them and zhings would have happened I better won't think about. Please do this step if you try it! 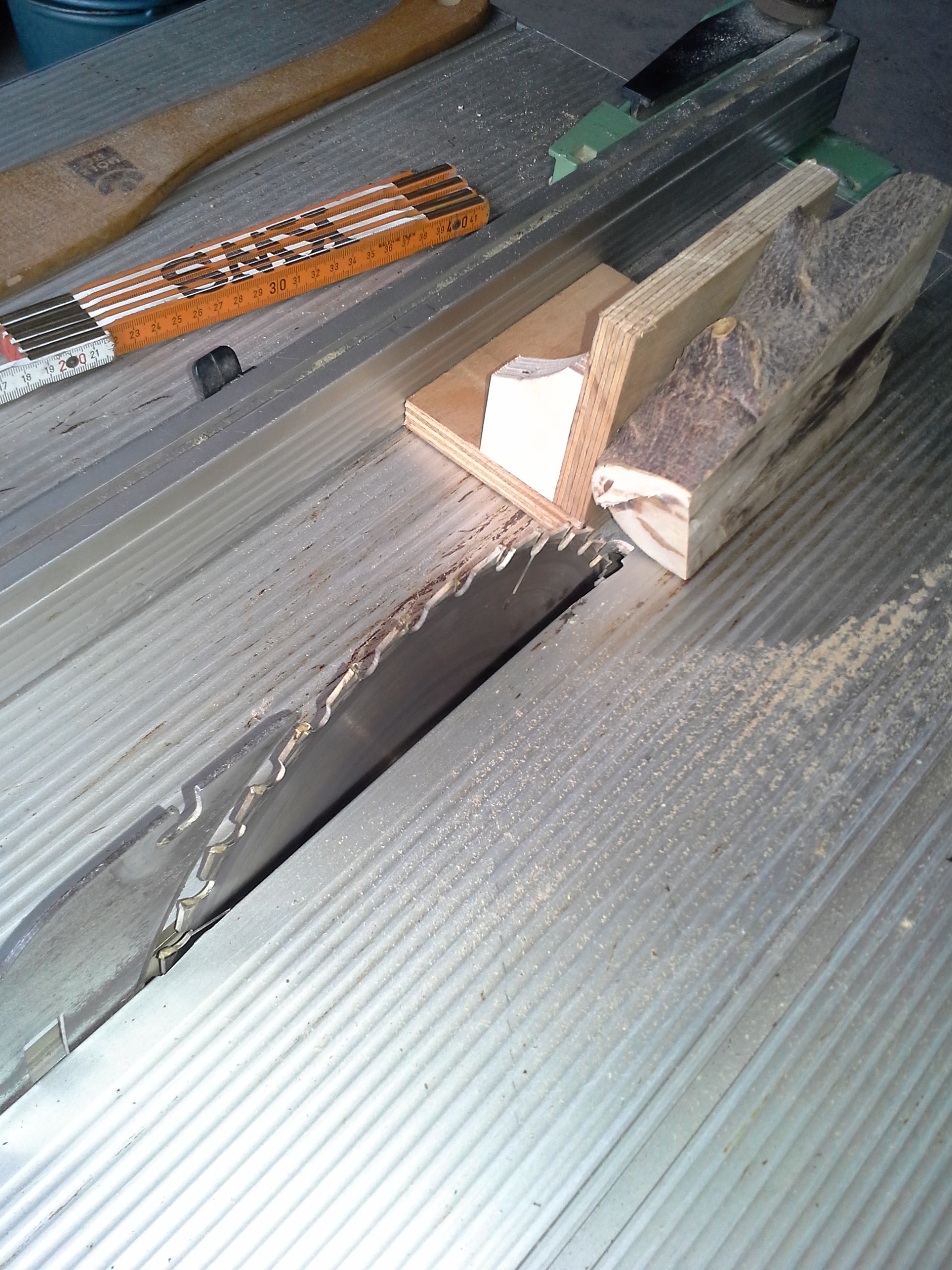 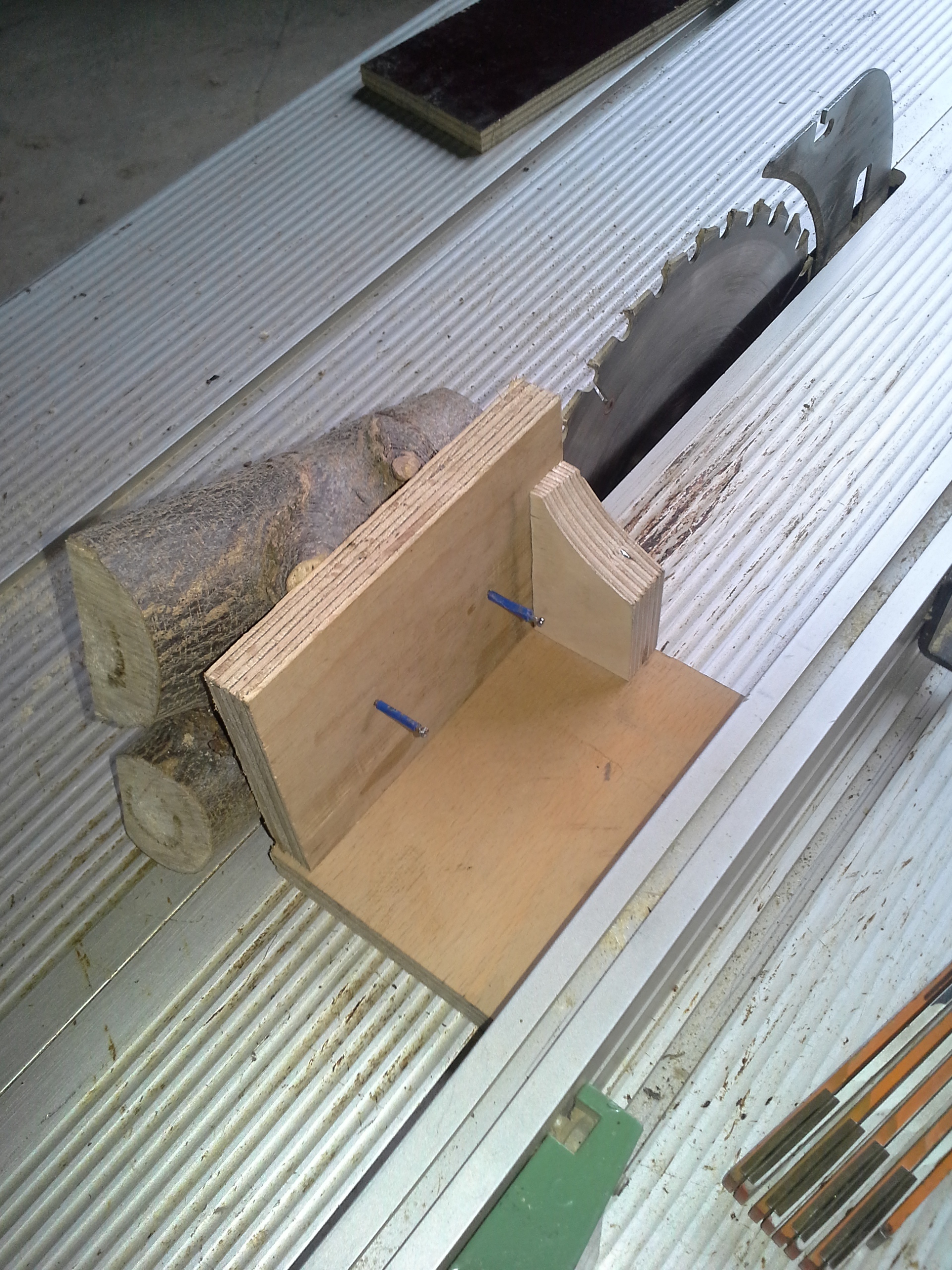 And now my finished board out of the fork fell of the saw and was ready to being laminated! Maybe a bit sanding is still needed before, but I have a smooth and even surface now!
The part of the outher shape which stucked still to the sled I just removed with pulling out the nails a bit, so the sled can be re-used a tousand times! 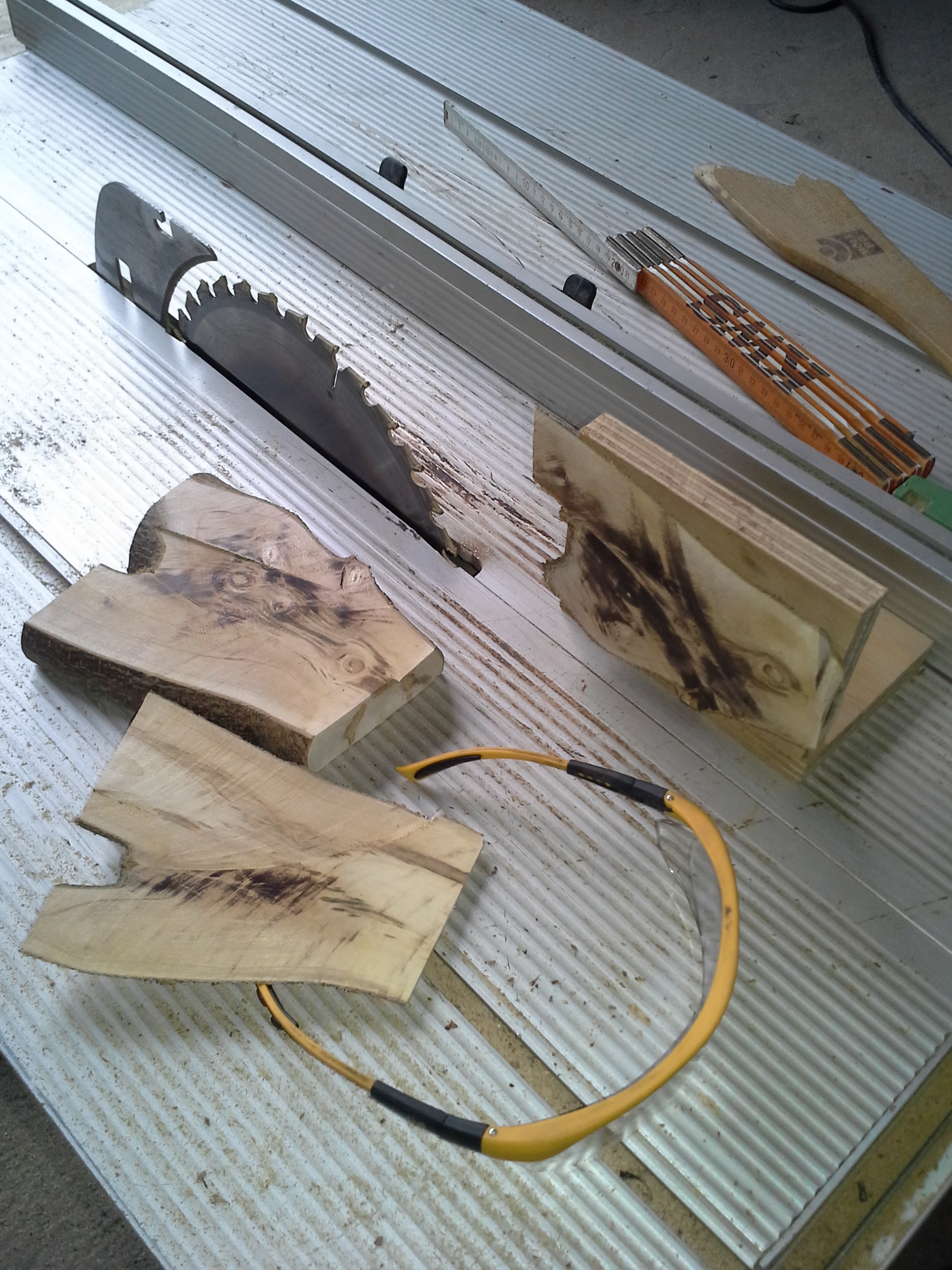 Feel free to try this! But please, check the depth of your nails before sawing the second part off!

And I want to excuse myself for the relatively bad quality of my pictures this time, I didn't wanted to take my camera into the dusty workshop so I did the photos with a phone...

I'm sure you'll see some pictures of the finished fork sometimes!

i envy your workshop

Im from Holland, isnt that weird?

Schleuderjunkie said:
Awesome! The only problem is that I have no tablesaw
Click to expand...

Technically you could use the same principle with a handsaw. It's more work but it could be done.

Joined May 26, 2012
·
2,201 Posts
Happy to inspire anyone and making life easier, Haecksler.
I didn't have time to go into much detail as I was cooking for a party whist typing ( yes, over cooked the pasta, DOH!) but it seems you got what I meant.
My only thought is on the nails. Screws are better at holding the work piece tight against the jig. Nails don't have the best holding power in the direction parallel to the nail shaft. If you were to 'toe nail' them, two and one, then it would improve the holding force. A screw on the other hand is simple and as you take slices, you can just use shorter screws. You don't have to drive them in too deep, certainly less that a nail, to get enough purchase for two or three of them to hold the work piece. Another addition is two vertical slots in the face board of the jig. These will let you slide the screw up or down to meet the board where need be.
Great idea using the jig on the table saw and using the saw fence to run the jig along, parallel with the blade. I suggest, especially if you continue with nails, would be a stop/backer block on the trailing side of the jig. This will get the work piece a back stop against the pressure of feeding it into the blade and take a lot of the side ways pressure off the nails.
I haven't a fence on my band saw so I have my rather quickly made version siding in the miter slot of the saws table, on a hardwood runner. I used it to cut the "Y" branch I used for my Dog Bone SS. Cool thing too is you can take those outside off cuts and glue them to either side of a piece of plywood and hand trim the plywood core to match the contours of the natural outside parts. Kind of a natural laminate with a plywood core.
Other thing with using screws you can make some wood "washers" of varying thickness. Use something like a holesaw to cut them out of 1/8, 1/4, 1/2" plywood. Stack them in various combinations and run your screw throuhg the hole in the middle. What these do is act as stand-offs or spacers between the branch and the jig face. This lets you adjust the angle of the branch to compensate for things like one arm of the "Y" being skinnier than the other or one of the fork arms being curved funny. The screws will pull the branch tight to the spacers, holding it in the right position. Making them from wood is safer than using metal washers.
Tough part is flipping a branch that's too big to slice in one pass and get it lined up. Hand sawing might be the way to go there.
The more you use a jig, the more improvements you'll come up with. I don't think there is ever a truly "finished" version of a shop jig

Schleuderjunkie:
Ah, now I see, it's the tablesaw...
You could basically do the same thing with a bandsaw - unfortunately I haven't got one!

Dan:
Really thank you for your kind words!

onnod:
Ok, it must be the tablesaw...

Doc:
Why?! Why am I the man? Didn't read that the first time here!

Ob:
Indeed! Seemed so logical, I had to try it directly the next day.

Whittler:
Exactly. The only thing you need would be a vice. I also flatened the fork at one side with a handsaw as the first step. You could also finish the whole thing with a bandsaw...

Bert:
Happy to hear you're happy! I hope your guests still like you now
Now I think that I've understood what you ment. I first thought that you meen using screws at the one side and hexnuts on the other side. Now I suspect you ment something like Spax? Then you're definitely right, that could work even better than nails.
The idea of re-using the outer parts is also great, I think I'll do so!
And again thank you for your great idea(s)!

Haecksler said:
Bert:
Happy to hear you're happy! I hope your guests still like you now
Now I think that I've understood what you ment. I first thought that you meen using screws at the one side and hexnuts on the other side. Now I suspect you ment something like Spax? Then you're definitely right, that could work even better than nails.
Greetings, Haecksler!
Click to expand...

Pasta was for homemade mac+cheese for a pot-luck, so not too bad

Had to look up "Spax". Those are screws. What you thought I meant are bolts with nuts. Screws are pointy at the tip and not used with nuts. And yeah bolting through the piece and then cutting on the saw would get exciting really quick Ha ha. Though with a carbide blade it maybe just cut right through, but mess up your blade.