eliminating "woble" from in flight arrows?

Joined 1 mo ago
·
1 Posts
Hello from a retired American in (currently) Vietnam. Was just wondering if you've ever seen slow motion film of arrows fired from bows in flight? They have a near constant back and forth "wobble" at the mid point, caused by the string applying all the propulsion force to the rear of the arrow, and inertia causing the tip to "take flight" fractionally later, causing the actual arrow to 'bow out' in the middle by as much as an 2.5 cm (an inch) in each direction, meaning the midpoint is moving as much as 5cm (two inches) in total. (The "Discovery Chanels" old TV show "Myth Busters" has excellent documentation of this affect in their episode on "splitting an arrow", and found this as the major reason why splitting an arrow couldn't be done consistently by standard bows/arrows, I believe even including carbon fiber arrows).

If you're ever bored to tears, you might play around with reversing the bow= holding the bows body with the string AWAY from the shooter, with the arrow's nock out at the tip. It would require a deeply curved bow, to allow for a full draw, but the tip would now be pulling the shaft, so in theory, it should stop the observed affect of an arrows in flight "wobble", greatly increasing accuracy (but the gains might be lost by needing the nock to be slightly off center to allow the shaft to fly smoothly past the string).

Oh well. I normally am retired in Thailand, but was "trapped" in Vietnam back in Feb of 2020. I am now actually quarantined on a small side street so am going slightly stir crazy, LOL Feel free to laugh at the stupidity of the idea and move on, or play with the idea if you are ever just bored to tears. Your video's have been a real help in passing the time here waiting for the world to right itself. I might have played with the idea myself, but 1), I'm in a condo with no access to any form of shop, and 2), I'm not sure how the local Vietnamese would react to the 195cm (6'4") tall American running around down town Ho Chi Minh (Saigon) playing with a bizarre looking lethal weapon. I mean our lot DO have that past history of dropping huge amounts of napalm and explosives in this country... : LOL
L

Joined Mar 25, 2017
·
2 Posts
This is the long term phenomena known as the "Archers Paradox". It is not just inertia, it mostly results from interaction with the body of the bow. The string traditionally pulls toward the center of the bow body, but the arrow is expected to go around around the bow: 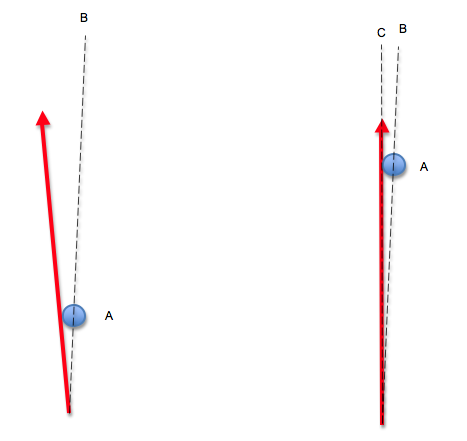 en.wikipedia.org
Center fire bows exist that have a window in the direct center of the body, that allow the arrow to follow the path of the string. Cross bows have short stiff bolts, plus the string is usually constrained to follow a path directly behind the bolt so the effect is minimized.
There is also a lesser contribution from inertial compression from the push of the string as you describe, and the concept of driving the arrow by pulling from the head has been explored with some arrow slingshots. The problem is that then the length of the arrow reduces the length of the draw.

Joined 1 mo ago
·
1 Posts
it’s not as much from the push as much as it is from the fact that the string on the bow is not moving in the exact same direction as the arrow. it’s called a “paradox” because it CAN be done accurately which doesn’t make sense. under water a spear gun produces less wobble because the elastic is moving in the same direction. In the vacuum of space that would make a big difference.
1 - 3 of 3 Posts
Join the discussion
Continue with Facebook
Continue with Google
or sign up with email
About this Discussion
2 Replies
3 Participants
Last post:
bluechicken84 1 mo ago
The Slingshot Forums
A forum community dedicated to slingshot owners and enthusiasts. Come join the discussion about optics, hunting, styles, reviews, accessories, classifieds, and more!
Full Forum Listing
Explore Our Forums
Show off your homemades! General Slingshot Discussions Welcome & Introductions New project ideas Knives, Swords, and other bladed weapons
Recommended Communities